Neptuno Films was established in Terrassa (Barcelona) in 1991, and soon became a driving force in the world animation production industry. Since then Neptuno has experienced steady growth, building up of a library of animated characters with universal appeal, especially brands such as Connie the Cow, Dougie in Disguise, and Megaminimals. The company currently constitutes one of the largest fully-fledged studios in Europe with a distribution arm that manages its TV, video and merchandising rights portfolio. In The Global Animation Business report, with the participation of CARTOON, the European animation association, Neptuno Films ranked second among the most prolific European studios. The company was chosen as one of the top 10 international animation studios outside the United States by Animation Magazine.

We are proud that our series have been seen all around the world. Companies including Noggin, Disney UK, NRD, Discovery Kids LA and RTVE have chosen our productions for broadcast.

Our work has been a source of fulfilment and enjoyment over the years, and we have made it our top priority to communicate positive values to children all over the world, delivering engaging and creative content for multiplatform television. 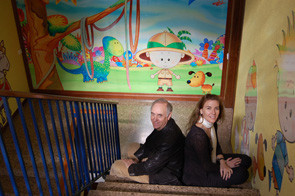